Message From the Chairman

AIMING TO BE THE BEST IN THE WORLD

​Cengiz Holding, whose roots were laid with the foundation of Cengiz İnşaat in 1987, has a strong and dynamic approach which has driven its expansion into a group of 35 associated companies.

Cengiz Holding continues to grow steadily, especially in the construction, energy and mining industries. Its innovative structures will undoubtedly catch your attention, perhaps while on a subway ride or during a trip to the airport.

We were proud to construct the Taksim-4. Levent metro line in Istanbul, introducing Turkey to its first metro line. We completed work on the Ordu Giresun Airport way ahead of schedule. The airport was the first airport-on-the-sea in Turkey and Europe and only the third in the whole world. When you travel to the region and your plane lands on the runway in the middle of the sea, you will see what the workers and engineers who are members of the Cengiz Holding family have achieved with their determination.

We have aimed to be the best since day one and, as we progress along our road, we will continue to put our signature to the biggest, best and most influential projects..

With this vision, in 2013, the Joint Venture Group we set up was awarded with one of our biggest projects yet: construction work for the “Istanbul New Airport Build-Operate-Transfer Project” along with 25-year operating rights. When the project is completed, it will be one of the world’s largest airports, with a passenger capacity of 150 million. Cengiz Holding continues to put its signature to projects that Turkey can be proud of, not only in construction, but also in the energy and mining industries.

When the natural gas combined-cycle plant we built in Samsun opened in January 2015, we achieved two records: We took the efficiency record from Germany and brought it to Samsun. We also set an all-time record for the fastest built power plant in the world by completing the plant 9 months ahead of schedule. With environmental aspects that are way above global standards, the plant brought Turkey the grand prize for power plants in Europe, the Middle East and Africa. 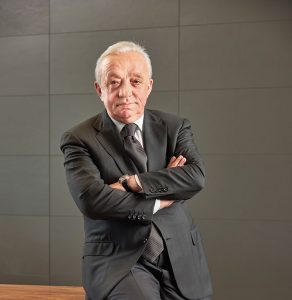 Our initiatives in the energy industry continue with strong partnerships, particularly in electricity distribution. Today, we provide approximately 30% of Turkey’s electricity in four power distribution regions.

In the mining industry, we took over the Eti Bakır A.Ş. and Eti Alüminyum A.Ş. plants just before they were about to be shut down, renovated them throughout with the latest technologies and elevated them to a position among Turkey’s industrial giants. Today, Eti Bakır A.Ş. is the only smelting plant in Turkey capable of producing copper from the ore.

Eti Alüminyum A.Ş. is also the only integrated plant in Turkey capable of producing aluminum from the ore. The Company is listed among the Top 500 Industrial Institutions in Turkey, compiled by Istanbul Chamber of Industry, and takes the utmost care regarding the environment and occupational safety in all its work.

Each member of the Cengiz Holding Family is committed to safety, high quality and good service. Together with this, all our work is approached with respect for the accumulation of knowledge, education, ethics and environmental values.​​​

The company aims to be not only a leader in every industry it operates in, but also a pioneer, and also plans to repeat this success on an international level, turning into a global brand that will bring added value to our country though its achievements.

With its commitment to operating standards, and together with its valued personnel who work in harmony like a huge family, I firmly believe that Cengiz Holding will reach all its objectives.

Mehmet Cengiz
Chairman of the Board